In spite of, these two mentioned the best first-person shooter games, there are several online battle royale games available for Android platform. However, Fortnite isn’t available officially on Google Play Store. But the below mentioned all the 5 battle royale games are available on Play Store. If you’re a mobile gaming freak or love to play slightly different or unique games in the same genre, these following games are for you.

The Conflict.io is a simple battle royale game just like Fortnite. It does have all the necessary features and elements similar to the survival games. You will get a map, weapons, vehicles, good visuals, and controls as well. The game features only 35 players battle along with group play. However, the game server isn’t that much optimized yet. So, you can notice some lag or connectivity issues during gameplay. The visuals and characters are animated same as Fortnite. 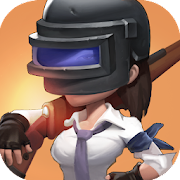 It offers in-app purchases as well. Developed by Guangzhou Yuechuan Network Technology Co., Ltd and has been installed 500K+ times. The game initial download size is 67MB, requires Android 4.1 or above and rated 4/5 stars. It’s definitely recommended to try as the Fortnite alternative game.

Creative Destruction game is an actual Fortnite alternative game for Android devices. You can simply get a taste of Fortnite by this game and that’s why we can call it a clone. Creative Destruction is a sandbox survival game for mobile which features sandbox crafting and Battle Royale with a decent cartoon art style. It includes a wide map area with 13 interesting places to explore and provides 100 players battle. You can create or destroy things, build bastions, collect weapons and more. It does have some occasional bugs and frame drops.

The game offers in-app purchases and developed by ZuoMasterDeveloper. It has been installed over 10 million times, requires Android 4.1 or higher. The game download size is 85MB and rated 4.4/5 stars.

Garena Free Fire is one of the most popular battle royale games on Android. It includes 10 minutes of quick gameplay option with up to 50 players. Meanwhile, you can also create a squad of 4 players along with a voice chat feature. The graphics and gameplay are quite decent and smooth enough for Android. Loading time is also quick enough and provides the same interface within gameplay like PUBG. It’s an ultimate survival shooter game where you can play against 49 other players.

Developed by GARENA INTERNATIONAL I PRIVATE LIMITED and requires Android 4.0.3 or above. The game has been installed over 100 million times with an initial download size of 62MB. It’s been rated 4.5/5 stars and offers in-app purchases.

Rules of Survival is one of the PUBG clone games for Android with a lot of similarities. The game features airplane drop, maps, find stuff, kill enemies etc. It provides some additional weapons, vehicles, and matches with 120 participants. The gameplay isn’t that smooth in terms of other battle royale games. However, the developers working hard to improve the frame drops and stability issues.

It’s been offered by NetEase Games and has been installed over 1 million times. Offers in-app purchases, requires Android 4.0 or up, 59MB of size, and rated 4.2/5 stars.

Pixel’s Unknown Battleground is another PUBG clone game for Android. This game features pixel-like graphics but the controls and options are same as any other battle royale games. It provides pixel gun, AK, smg, multiple-barrel, and other weapons as well. Customized 3D skins, HD graphics, huge map area, auto-shooting, live chat all are available here. It does only have some stability issues over the internet.

The game has been developed by FPS Shooter and rated 4.3/5 stars. It’s been installed over 10 million times, requires Android 4.1 version or above. The 92MB sized game offers in-app purchases as well.