The Chinese tech giant Xiaomi recently launched two Android phones with 2G/4G VoLTE and T9 keypad in China called Xioami Qin. The Xiaomi Qin AI 4G feature phone is based on Xiaomi Mi Crowdfunding platform. The Qin1 2G and Qin 1s 4G feature phone support smartphone features. This project has already got so many support from users and the device comes with some useful features as well.

The Xiaomi Qin AI (Qin 1s) is a 4G VoLTE-enabled feature phone which comes with a 2.8-inch QVGA color display with a resolution of 320×240 pixels. The 4G Qin1s device is running on Android OS called Mocor5 version whereas, the 2G Qin1 Nucleus version out of the box. The phone features T9 keypad which will give the traditional mobile handset look and feel. The key feature of this device is that it comes with AI Voice Assistant feature for real-time voice translations including 17 different languages. 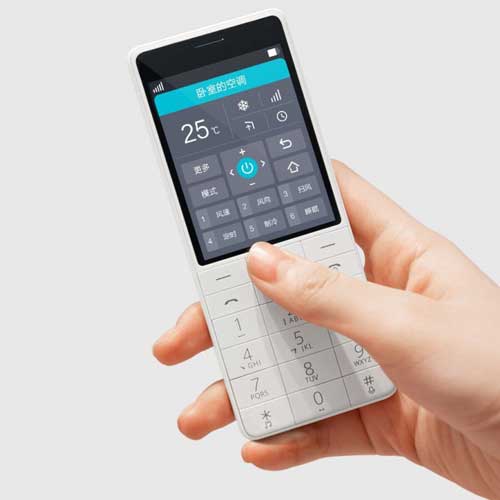 The AI Voice Assistant (Built-in small love classmate) could also give answers to the questions and tell poetry to children. It has a voice infrared sensor and remote control to control some of the home appliances like TV, AC etc. The Xiaomi Qin AI 4G feature phone is powered by a dual-core SC9820E ARM Cortex-A53 chipset clocked up to 1.3GHz. The CPU is coupled with the Mali-T82 GPU with the 256MB of RAM and 512MB internal storage capacity. The device supports a hybrid dual-SIM slot with MicroSD card expansion. The handset doesn’t have any camera setup.

The device supports Wi-Fi, Bluetooth 4.2, GPS, dual 4G VoLTE with dual standby, 3.5mm audio jack, stereo sound speaker, USB Type-C port for charging etc. It is packed with a 1,480mAh battery which would last up to 15 hours of talk time and 420 hours of standby time. The handset is available in two colors such as Iron grey & Porcelain White variants.

The Xiaomi Qin1 2G feature phone is powered by a MediaTek MT6260A chipset with ARM Cortex-A7 cores. The phone comes with the 8MB of RAM and 16MB of internal storage capacity. This handset also comes with the same display, battery, and connectivity options without VoLTE support. It’s running on Android OS over Nucleus version. It also comes with two same colors as Qin 1s 4G.

The Xiaomi Qin AI is priced at Yuan 199 (Rs. 2,000 approx) and the sale/shipping will start from September 15, 2018. On August 2, the crowdfunding went online for booking and got an overwhelmed response in China. There is no information about the launch in other countries till now.