In 2018, we already entered into a full bezel-less full view display generation where the screen-to-body ratio comes with up to 93.8% till now, we have seen in Oppo Find X. The Vivo NEX series smartphones also have FullView display without any notch. But Samsung filed a patent of Multi-Display full-screen smartphone this year. 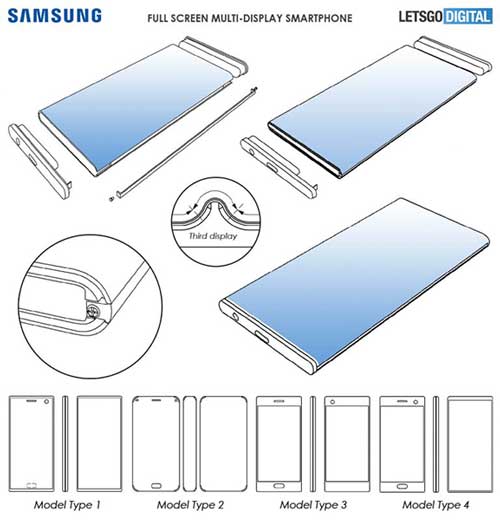 There are four models mentioned in the patent. Whereas, the three models out of four includes thin bezels and slightly considerable bottom chin. The third display can be used for the folding part of the device including an optically transparent layer. The front and the rear display will work individually and also can be used for individual purposes.

It will definitely work for multitasking activities. Whether it can be also used for a combined widescreen to use as a tablet or phablet device. Last month Samsung already patented a full-screen smartphone with the magnetic strips. By using this strips without a regular frame, it could be converted into a larger screen. We have come across so many patents from Samsung with futuristic designs but those are not implemented in real. So, it is expected to not see the multi-display full-screen smartphone in future.

Though the multi-display smartphone seems quite cool, it doesn’t come in handy for all of the time. Still, within two years, the smartphones will be launched with foldable and curved flexible display. Most of the companies like Vivo, Oppo, LG, Motorola, Huawei, Microsoft, including Samsung is on the list of making foldable smartphones.