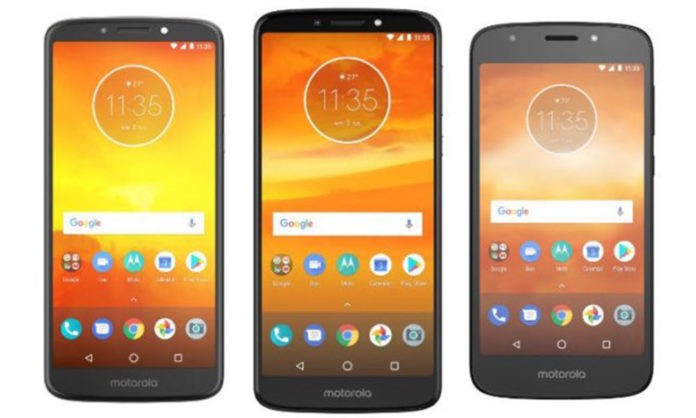 The Moto E5 smartphone comes with a 5.7-inch HD+ 18:9 aspect ratio display with a resolution of 1440 x 720 pixels. It is powered by 1.4GHz Qualcomm Snapdragon 425 Soc based on Cortex-A53 CPU along with 2GB of RAM and 16GB of internal storage. The internal storage can be expandable up to 128GB via microSD card.

The device is packed with Adreno 308 GPU. It has a 13MP rear camera with f/2.0 aperture and a LED flash. Whereas, the front has 5MP selfie camera with a selfie flashlight. The rear camera can record 1080p videos @ 30fps.

The device is packed with a non-removable 4,000 mAh battery with fast charging support. The Moto E5 comes with a dual-SIM and a single nano-SIM variant as well. It weighs around 174 grams and will be available in Flash Grey and Fine Gold color variant.

The fingerprint sensor is placed on the back side. All other sensors like Proximity, Ambient Light, Compass, and Accelerometer sensors are available on this device. The connectivity features include Bluetooth v4.2 with A2DP and LE, dual-band Wi-Fi 802.11 a/b/g/n, Wi-Fi Direct, Hotspot, A-GPS, GPS, GLONASS, 3.5mm audio jack, and a USB2.0 charging port. It has a smaller 2,800 mAh battery with any fast charging support.

The Moto E5 Play will run on Android 8.0 Oreo stock ROM. The device could come with the water splash proof certification as well. It will be available in Black, Dark Lake, and Flash Grey color options. It weighs around 150 grams.

In terms of the other two devices, Moto E5 Plus has better specifications. The device will come with 5.99-inch HD+ 18:9 aspect ratio display with a resolution of 1440 x 720 pixels. The device will be powered by Snapdragon 435 chipset along with 3GB of RAM.

It will also run on the latest Oreo stock Android 8.0 out of the box. It will be coupled with Adreno 308 GPU and 32GB of internal storage, which can be expanded up to 128GB.

The device has a 12MP rear camera with f/2.0 aperture with laser autofocus and PDAF feature along with LED flash. Whereas, the front has 8MP selfie camera with f/2.2 aperture. It can record 1080p videos @30fps.

There are also HDR and Panorama mode available. It has a larger 5,000 mAh battery with Motorola Turbo Charging feature which can charge 6 hours of juice in 15 minutes of charge. The body has a water splash resistance coating.

The device will be available in four colors such as Black, Mineral Blue, Golden, and Flash Grey variant. It has a dual SIM dual standby option and a single nano SIM option as well. It weighs around 200 grams.