Apple filed a trio of new patents to the US Patent and Trademark Office on Thursday, March 28, 2018. All of these three patents contain the same listing of “Device having integrated interface system” about new MacBook with Virtual Keyboard and an invisible trackpad feature. Whereas, the main body of the MacBook will have a transparent keyboard surface (plastic/glass). That transparent layer could be layered with some sensors which can detect the real-time user finger touch movement over the keyboard with a customizable layout.

The sensor will work on touch sensitivity and touch pressure which can illuminate the keyboard from the surface. In some cases, if any user uses completely flat keyboard surface, this will also produce a virtual keyboard with some customizable layout configurations. In some cases, when a user will use a physical keyboard, the system will allow for the keys to perform as usual instead of the trackpad. This can work with other accessories like joystick etc. 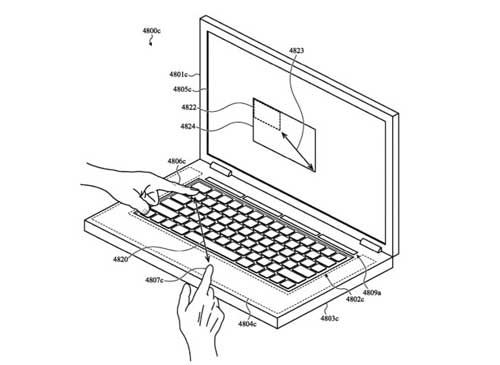 The customizable haptic feedback will also be provided to the users to feel that the key is pressed or not. For the completely flat surface, Apple envisions a keyboard accessory that can be used with the virtual keyboard. The keys can also be used for the gesture-based controls on the top. This keyboard will also show extra alternative buttons depending on the applications which you’re using. So, the gesture control trackpad will be converted into an invisible trackpad.

The flexible fabric covered lightweight keyboard material will be sealed perfectly which will resist some splash and dust as well. Apple already filed for a “dual screen notebook” in February 2018 previously, where the screen will be used as an input area. As we all know, Apple takes time and spends a lot of money and labor in their R&D level to achieve new and unique development features and products for the customers. 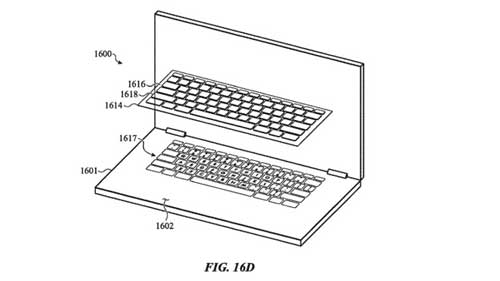 However, the filling patent isn’t guarantee anything to continue developing the research and production by Apple for commercial use. So, this leaked information could be used officially or not by Apple.

Learn These 6 Ways to Use Your MacBook Efficiently